I see trees of green, red roses too; I see them bloom for me and you. And I think to myself, “What a wonderful world.”   —  Louis Armstrong

The cloudless sky was blue and the temperature 92 degrees in Kragnes, Minnesota. A gentle breeze blew through the trees. I looked out from the deck in front of the small chapel. My son and my two brothers and Melanie’s best friend and two daughters stood with me. My friend, the Reverend Doctor Steven Streed, was next to me.

Melanie came down the aisle on the arm of her son. She was beautiful. My heart filled with tears of happiness, and I smiled. Melanie and I would commit our lives to one another in just moments.

I scanned the 150 family and friends and saw my dad with tears in his eyes — Melanie’s mom too. I watched as Melanie and Matt approached us. I thought how my life had changed over the past few years. My journey to this moment had been arduous and its fulfillment was moments away.

I had divorced three and one-half years earlier. The decision was difficult to make at age 54 after a 35-year marriage, and I thought long and hard about the choice. I would divorce with no guarantee that I would ever find the kind of relationship I yearned for. I saw the possibilities for joy and for despair; I was not naive.

I was filled with excitement about new possibilities as I ventured out onto my own. I wanted to marry again, but I also wanted to take the time to make a good transition and to learn more about myself. I also felt sad about the losses in my life and anxious about the unknowns: What would happen to me? What if I had a heart attack in a month? Who would help me? Would I lose the love of my children? Was I crazy to give up financial security? Would I ever find the right person to be my partner in life? I feared ending up old and alone. My mother died shortly after my separation and my mentor — best friend, and colleague — Diane Olson died unexpectedly a few months later.

I moved to the San Juan mountains near Ouray, Colorado to grieve, to fulfill a dream, and to renew myself. I wanted to spend time in the wilderness of my life where I could pause and reflect, ponder, and imagine. I spent 14 months in the San Juan mountains and then moved to Fargo, North Dakota where I had lived for the previous 17 months. Our journeys in life often take us to unexpected places.

The marriage of commitment between Melanie and me was the most significant moment of the rest of my life. For me, the ceremony signified much more than the important ritual and celebration of marriage. This singular moment represented the culmination of an adult lifetime of disillusionments followed by new hope, endings followed by new beginnings, despair followed by deeper authenticity, and confusion followed by illumination.

The faint of heart do not take spiritual journeys. Personal freedom takes us down roads not traveled before. We cannot know ahead of time how our choices will turn out; we can only influence the larger forces of life — we cannot control them. Anyone who says they possess unquestioned faith and a clear and certain path deceives him or herself from the anxiety of choice and the vulnerability of authentic risk.

I chose my personal and professional journey intentionally, as an act of authenticity and spiritual exploration. I often found my quest to be lonely and painful — filled with doubt, vulnerability, and uncertainty as to the rightness of my path. At times, I wondered if I had taken on more than I could handle, which was the only way to find out how much I could handle. I also found my odyssey to be filled with the excitement and aliveness that courageous action can provide. Beneath the anxieties, I always felt a strong confidence. My challenge was to stay true to my vision, values, and purpose despite insecurity and ambiguity. I met the test.

As Melanie came to me on the deck, I thought, “How I love her.” Melanie has the greatest soul I have known. I was astounded when I first got to know her. She had wounds, she had imperfections, she was spontaneous, and she rang true. Her naturalness captured what I tried to articulate when I talked and wrote about authenticity. I soon said to Melanie, “You personify all I am trying to become and you don’t even know of your perfect humanness.”

Her humble origins served her well: She grew up in a family of ten children. She began picking weeds in the bean fields when she was eight years old. At 10 she hauled garbage. As a teenager, she waited on tables in a cafe and cleaned rooms in several motels. Then she worked as an operator for the telephone company. She settled into a large organization and advanced to the top of her profession. She became a great leader.

I took Melanie’s hand on the deck of the chapel. The service was simple: two songs, two spiritual readings, a brief sermon, and prayers. Melanie and I faced one another and read the vows we wrote together. We committed our lives to one another. Soon the service ended and Pastor Streed introduced us as “Mr. and Mrs. Tom Heuerman.” We kissed. The church bell rang, and we walked down the aisle. Louis Armstrong’s voice moved us.

I see skies of blue and clouds of white

And I think to myself what a wonderful world.

The colors of the rainbow so pretty in the sky

Are also on the faces of people going by

I see friends shaking hands saying how do you do

They’re really saying I love you.

I never thought such goodness would happen for me. I felt grateful to find love and intimacy at that time of my life when it would have been so easy to accept less.

What a wonderful world.

The 5-year-old girl, in a white T-shirt and cowboy hat, approached the woman — more than 75 years her senior — hesitantly. With a tone of reverence in her voice, she asked, “Are you Ruth, The wife of the sculptor?”

Ruth Ziolkowski, dressed in a simple yellow dress, blue checkered smock, and white moccasins, leaned over, extended her hand, and said quietly, “Yes, I am.” Mrs. Ziolkowski put her arm around the child and graciously posed for a photograph. 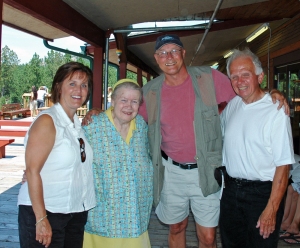 Only minutes before we had stood on the extended arm of the Crazy Horse Memorial at the top of the 600-foot Thunderhead Mountain and looked at the visitor center a mile away.

Pete — our guide and teacher — and Warren Harming, a member of the Crazy Horse Board of Directors and close friend of the Ziolkowski family, drove us up the mountain.

When we got out of the vehicle, Pete asked us to walk out on the arm and not look back until he told us to. About half way out the 263-foot arm pointed east over the head of Crazy Horse’s horse toward the Black Hills, Pete said, “Okay you can turn around now.”

We turned and looked up at the nine story high head and face of Crazy Horse. “Oh my God” was our instant, involuntary reaction. Another group of people came to the top of the mountain later. As they walked with their backs to Crazy Horse, we watched to see their reactions when they turned. “Oh My God’ was the universal reaction upon seeing the face of Crazy Horse up close. 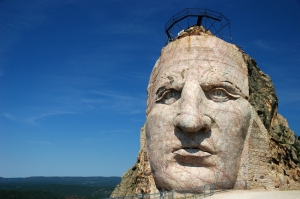 In 1947, at age 38, after he served in World War II, and turned down a government commission to create war memorials in Europe, Korczak Ziolkowski arrived in the Black Hills to carve a 100-foot likeness of Crazy Horse.

During his early months in the Black Hills, Korczak sat and looked at the mountain for five days and five nights. We can only imagine what he thought. At the end of the five days he decided to carve the entire mountain not just the top 100 feet. The vision had grown. After all, he said, “I had nowhere to go.”

Crazy Horse would be a symbol: a tribute to all North American Indians. The vision now included a memorial in the round — the largest sculpture ever undertaken, a Native American medical center, a university, and museum. Korczak’s purpose was to give the Native Americans “a little bit of pride and to try to right a little bit of the wrong … [the white people] did to [them].”

Korczak knew he would not live long enough to finish the massive project. So, he and Ruth spent three years detailing three books of plans for the Memorial.

Ruth leads Crazy Horse today. Seven of her 10 children, each of whom left the Memorial to do other things and returned because it was “where they belonged,” keep the dream alive and progress continues. Ruth says it is “not important when it’s finished; the important thing is that work never stops.”

When finished, the Memorial will be 563 feet high and 641 feet long. It will be taller than the Washington Monument and larger than the biggest pyramid. The four heads of nearby Mount Rushmore will fit inside of Crazy Horse’s head. 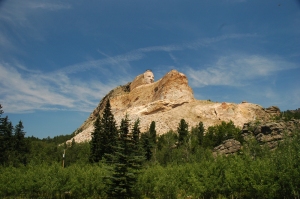 Melanie told me after our visit: “I knew you were a believer in the spiritual power of this vision. After seeing this Memorial in person, I am now a believer too.”