Man was born to turn the world into paradise, but tragically he was born flawed. And so his paradise has always been spoiled by stupidity, greed, destructiveness, and shortsightedness.
Daniel Quinn

Alone on Thanksgiving 2001, I was a solitary figure as I walked north along County Road 23, two miles south of Ridgway, Colorado — the northern entrance to the San Juan Mountains.

The snow-topped San Juan’s rim the Uncompahgre Valley, home of farms, cattle ranches, and magical rainbows each April. Cows and horses dot the fields below. I felt peaceful.

The day awakened brisk and flowed toward me from the mountains to the east. My boots crunched the gravel. The cool air burned my cheeks. The morning sun warmed my skin. Magpies, bluebirds, and blue jays sat on the fence posts and in the trees along the road and dashed and darted about. I could feel the interconnected energy of the life around me—including myself as I too am part of nature.

How long can we live well on this planet when we extinguish 200 species a day to expand economic growth so we can feed, house, and enable the material and emotional addictions of our global over-population? Each day the threats of climate change grow more ominous. Will we change?

Nature has a deep purpose: to sustain the conditions for life—not necessarily human life but the existence of creativity and aliveness. Nature will survive humans; will we endure our own destructive flaws and learn to care for our home on earth instead of constantly diminishing her for more and more stuff and people? If we provoke her too much, she will turn her wrath on us more than she already has. Nature expresses her passions without mercy or sentiment, and she always wins. The longer we wait, the more we and all of nature will suffer.

I paused on my walk and said hello to two favorite young cows–“Brown” and “Tan,” I called them. They ignored me, and I moved on. A dozen deer, ears perked, stood frozen 30 feet away and watched me pass by. The local marmots rested in their homes. I saw no one and, other than the sounds of nature, my boots on gravel, and my breathing, my walk was quiet. I was in a reflective mood.

How can anyone believe they can control nature? I thought about a recent experience: I drove my jeep 12,000 feet above sea level on a narrow path of an old mining road. I was a few miles east of Silverton, 30 miles south of where I lived. A sudden rainstorm began washing the clay beneath my jeep away, and my vehicle began to slide back down the mountain close to a steep ledge. I went with her pull until I saw an opportunity to maneuver out of the slide. Nature reminded me of my powerlessness and humbled me.

I walked to the white house on the curve of the road into Ridgway, drank some water, waved to the barking yellow lab, and turned around for the walk home. In the spring, a couple of hundred skittish elk will graze in the meadows below me. Variety surrounded me on my walk. Diversity promotes adaptation and sustainability. A monoculture foreshadows death.

The return trip climbed uphill from about 7,200 feet. My breath got faster and deeper and my legs felt the strain. I finished my water.

Finally, head down, I trudged up the curved and rutted incline of the long driveway to the A-frame home nestled against the side of the mountain. I lived in the loft. I sat on the picnic table near the back door and under the deck; I was hot and wet with sweat. I breathed heavily. I notice Skeeter and Tate — two cats larger than Noga, my Westie — hunting in the brush. I felt alive.

I muttered an expletive under my breath in acknowledgment of the hard effort. I loved this three-mile walk in nature, which provided a milieu for creative contemplation. I was old enough to find it harder to believe in a loving God as I did as a child. I tried to figure out how I can believe and still see humanity as it is: so often cruel and unjust.

As I caught my breath, I thought back to when my brother Allan and I took a trip to East Africa for 18 days of wildlife photography in Kenya and Tanzania. The animals were excited, spirited, and expressive — they ran, jumped, and played. A Pride of lions slept, sunned themselves, and lounged while mischievous cubs played and irritated their elders who cuffed them gently.

A large group of giraffes loped across the plain. Two cheetahs stalked Thompson gazelles. A soundless leopard carried a young wildebeest into a tree to feast on for the next two or three days. Animals kill for food; not for ego or trophies. Elephants lumbered in front of the gigantic and snow-covered Mount Kilimanjaro as filled with excitement, I fumbled with my camera. 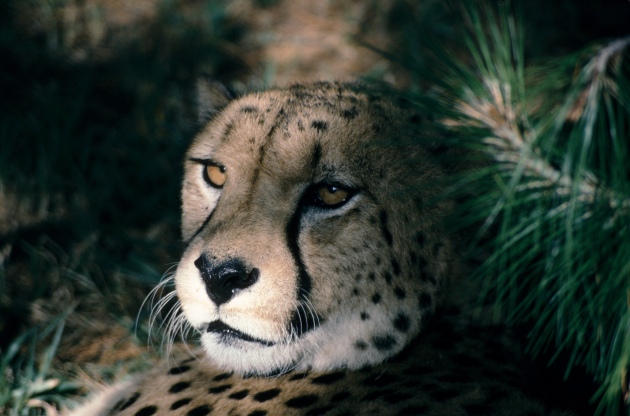 I watched the chaos of the annual wildebeest migration as two million grazers followed the rain. I began to sense the deeper order, programmed genetically over thousands of years, of their seemingly insane behavior. Order exists beneath chaos.

As I caught my breath, I decided to go and soak in the hot springs in Ouray — eight miles south at the front door of the San Juan’s. Many years prior, I drove around the mountain curve on highway 550 into Ouray. I saw the steam from the hot springs rising to the mountains. I was drawn to this beautiful place, and I returned several times to drive the old mining roads.

One day my divorce, my mom’s death, and the surprise death of my best friend provided the deep awareness of fragile and temporary life, and I loaded my jeep and drove West to grieve and live out my dream of living a year in the mountains.

The large hot springs pool sits surrounded by mountains and the town of Ouray — a tiny piece of Western history nestled in a bowl at the foot of the San Juan’s. I relaxed in the pool, drank water, and watched rock climbers, mountain goats, small avalanches, and the deer feeding in the adjacent park. Often I sat for hours and thought, other times I read, and I talked with locals and tourists. In the winter, the steam rises from the hot water, and often I can only see a foot or two in front of me. The pool fills with people when it snows, and snow-covered heads appear to float on top of the warm water.

I reflected on my connection with nature while I soaked. I thought about my eight days of whale-watching on a fishing boat out of San Diego:

I sat in a small skiff in the San Ignacio lagoon in the Mexican province of Baja California Sur. The boat bobbed in light waves. I watched as a 40-foot-long, 40-ton great gray whale surfaced beneath the boat and introduced her new child to the boat’s elated observers.

I peered into a large serene eye of the mother and wondered: What is her world like? Her gentle and knowing return of my excited stare linked us in a mystical moment. I realized that in one slight movement she could destroy the boat and kill its occupants. Instead, she chose to form a relationship with us — a profound choice: destroy or relate — the essence of competing worldviews in my world.

Mother and child floated with the skiff for a few minutes. The whales allowed the exhilarated humans to touch them and to lean over and kiss the barnacle-covered parent before mother and child submerged and disappeared. For a few short moments, the sky, the ocean, the people, the bobbing skiff, and the whale and her child were one. Nature is a form of love available to each of us. Maybe that moment of intimacy was God

For the animal shall not be measured by man. In a world older and more complete than ours they move furnished and complete, gifted with extensions of the senses we have lost or never attained, living by voices we shall never hear. They are not brethren, they are not underlings; they are other nations, caught with ourselves in the net of life and time, fellow prisoners of the splendour and travail of the earth.

People, the whales, and the lions are animals. It’s our job to use our gifts to nurture the planet not consume it for things we don’t need.

I feel sorrow for our planet. Nature and America have declined since 2016: under assault by those who feel entitled to destroy our natural world for ego and money; they never get enough.

A few years ago, I stood alone in Canyonlands National Park near Mesa Arch. The sky was dark at 4:30 am. I looked up at the cloudless sky and saw the star-filled cosmos. I felt overwhelmed with awe and humility. Fear too. I felt the pain of my insignificance. The questions and mysteries of life swirled in my mind. I’m not the center of the universe: I am minuscule in my brief moment as a participant in the interconnected natural world. Two hours later, I stood in front of Mesa Arch and watched as the sun rose in the distance.

Daniel Quinn was the author of the quote that is the title of this essay. I hope future generations will be able to have their own journeys into nature. It will change them as it will continue to change me.

11 thoughts on “THE JOURNEY ITSELF WILL CHANGE YOU”

This site uses Akismet to reduce spam. Learn how your comment data is processed.